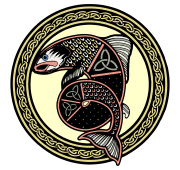 Our logo depicts a fish – a leaping salmon to be exact. Actually, it’s the Salmon of Knowledge (An Bradán Feasa in the original Irish). This symbol is derived from one of the many legends surrounding the great Irish hero, Fionn Mac Cumhaill. (In English they say Finn McCool.)

Fionn’s given name was said to be Demne, but he was sometimes called Fionn, meaning ‘the Fair’ because of his blond hair and complexion. Fionn, in Irish, means blonde.

As a young man Fionn went to learn poetry from the master Finnécas (Finn the Poet). For seven long years Finnécas had been watching the salmon in Fec’s pool in hopes of catching the Salmon of Knowledge. It had been prophesied that he himself would eat the Salmon of Fec and from that day forward he would have the knowledge of the world revealed to him. One fateful day, upon catching the wondrous salmon, Finnécas instructed Demne to cook it, but strongly admonished him not to taste even a tiny piece.

The young student eagerly complied and began preparing his master’s meal. While cooking the fish it’s skin bubbled up, and Demne used his thumb to push the blister back down, burning his thumb in the process. Naturally, he stuck his thumb in his mouth to ease the pain.

When Demne placed the cooked salmon before his teacher, Finnécas asked if he had eaten any of it. Demne innocently related how he had thrust his burned and throbbing thumb into his mouth. Finnécas asked the young Demne if he was called by any other name, and the reply came “I am sometimes called Fionn”. With that Finnécas realized that the prophecy was actually about the young poet standing before him. He told the lad, “From now on your name is Fionn, and it is for you that the Salmon of Knowledge is destined”. Fionn ate the salmon and from that day forth, whenever he put his thumb in his mouth, whatever he needed to know would be revealed to him.

The story of Fionn and the Salmon of Knowledge inspires students who eagerly await that sudden bolt of insight when the mysteries of the Irish language will be revealed to them. So the next time you see a Gaeilgeoir biting down on his thumb, you’ll know he’s looking for an answer.

Oh, and by the way, our logo is copyrighted: